Arrest of a friend 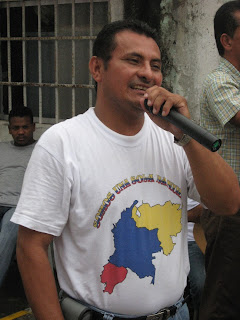 My friend, Martin Sandoval, was arrested along with 13 other people here in the town of Arauquita on November 4. He began a hunger strike the following day in protest of those arrests.

Martin is the president of the Permanent Committee for the Defense of Human Rights in the state of Arauca. He has consistently spoken out against the human rights violations committed by the Colombian government in the state – including mass arrests and the killing of civilians who are then reported as guerrillas killed in combat. He has also forcefully denounced the abuses committed against the civilian population by the FARC and ELN guerrillas in their fight against each other in Arauca.

Martin was arrested just four days after the United Nations High Commissioner for Human Rights, Navi Pillay, met with human rights activists in Arauca to discuss the difficult situation that they’re confronting in their work. The arrest also occurred just four weeks after the United Nations working group on arbitrary arrests visited Arauca to investigate the mass arrests that have taken place in the state.

The Permanent Committee for the Defense of Human Rights organized a fiesta in the Arauca City prison on October 10 – to provide solidarity for the prisoners and lift their spirits for a few hours. Martin greeted the inmates on behalf of the Committee (see attached photo). He is currently being held in the Arauca City police station and will probably be entering the prison again soon – although, this time, not as a visitor.

The Committee also helped organize a public hearing of the House of Representatives human rights commission in Arauquita on July 31 which was attended by more than 500 people. Martin and other community leaders denounced the persistent violation of human rights in Arauca. The leaders of the Committee believe that his arrest is due, in part, to retaliation for that hearing.

Maria Ruth Sanabria is the Arauquita representative for the Committee, and I organized her Montana and Northwest U.S. speaking tour in April. She called me on November 4 and said “I have bad news for you, my son, Martin has just been arrested,” as her voice began to break.

I arrived in Arauquita two hours later and went to the police station to enquire about Martin. The police commander told me that I couldn’t enter at that moment, but I could come back in 20 minutes at noon. When I returned shortly after noon, the prisoners were being loaded into a truck and were then taken to the Arauquita military base. We arrived at the base in time to see the helicopter land that, a few minutes later, took the prisoners away to the 18th Military Brigade headquarters in Arauca City.

Martin and the others are charged with rebellion, conspiracy and terrorism. The primary “evidence” in many of the previous mass arrests in Arauca has been the testimony of supposed former guerrillas that receive compensation for their collaboration.

Guillermo Diaz was one of the 13 people arrested along with Martin. Guillermo is the treasurer of the Laborer’s union and president of the Afro-Colombian association in Arauquita. Jose Ortiz, a young man who is studying accounting in the National Training Institute, was also arrested. José was the only source of financial support for his elderly mother. Reynel Cifuentes and Olegario Araque, who both have disabilities, were also among those arrested.

The news on the day of the arrests was dominated by the U.S. elections. Our friends from Arauquita, including Martin, want to believe that Barack Obama will represent a change from the policies of George W. Bush, and Bill Clinton.

Posted by Colombian Journey at 12:26 PM