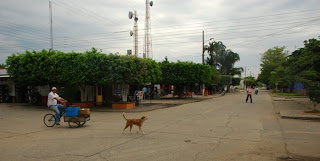 The “Revolutionary Armed Forces of Colombia – People’s Army” (FARC) declared an armed transportation stoppage here in the state of Arauca that is causing hardship for the people they claim to be defending. FARC guerrillas called the transport companies on March 16 and threatened to burn their vehicles if they didn’t obey the order to halt transportation.

I’m currently in the town of Arauquita – which lies along the highway that runs through the north of Arauca. The route to Saravena (35 miles west) was the first to be suspended early on the morning of March 16. The last taxi for Arauca City (65 miles east) left town around 2:30 that afternoon. Two armed men on a motorcycle halted a bus on the highway that day and forced it to turn back.

There are no longer any taxis circulating in Arauquita. The motorized canoes that take people across the Arauca River to La Victoria in Venezuela have also been suspended. School bus service in the towns of La Esmeralda and Fortul was suspended this morning due to threats from the FARC. Local stores are running out of fruit and vegetables, and the remaining food is increasing in price because of the scarcity.

Defense Minister Juan Santos flew to Arauca City on March 16 for a public meeting about the security situation in Arauca. Government authorities decided to fine the transport companies that are refusing to risk their drivers and vehicles during the stoppage. The military and police also announced that they were launching “Plan Meteor” to prevent the guerrillas from paralyzing transportation.

FARC guerrillas have burned a cargo truck and a tanker truck, halted a vehicle on the Arauca-Tame highway and placed it across the roadway blocking traffic, attacked a tractor-trailer, and also attacked a caravan of oilfield workers.

The military and police launched the “Arauca Moves” plan on March 17. The plan consists of armed escort for transportation caravans. One caravan of vehicles leaves Arauca City every morning for Arauquita, Saravena, Fortul and Tame. Another caravan travels daily from Tame to Arauca City. The caravans are accompanied by a large contingent of soldiers, police and secret police. Three of the caravans have been attacked by the FARC.

The United Nations’ World Food Program planned to deliver food supplements for pregnant women and nursing mothers, and children at risk of malnutrition, in Arauquita on March 19. The delivery was cancelled because the food packets couldn’t be brought here due to the transportation stoppage.

According to United Nations’ reports, FARC commanders ordered the “Black March” campaign (which includes the stoppage in Arauca) to commemorate the death of three of their top leaders in March 2008. Raul Reyes, the second-in-command, was killed along with 25 other people when his camp inside Ecuador was bombed by the Colombian military on March 1. Ivan Rios was killed on March 3 by his own bodyguard, who then cut off Rios’ hand to present to the government as proof to collect the reward money. Manuel Marulanda, the legendary leader of the FARC, died of natural causes on March 26 – after fighting against the Colombian government for more than 50 years.

The vast majority of people here in Arauquita have no idea why the FARC is imposing this transportation stoppage – they just want it to end soon. According to those same UN reports, the stoppage is going to continue until March 30.

Photo of the main street in Arauquita at 8:30 A.M. on March 18. There are usually ten or more taxis gathered on that block – providing transportation in town, and to Saravena and Arauca City.
Posted by Colombian Journey at 3:51 PM

It was really wonderful to see you today and hear the presentation about the current state of affairs in Columbia and Arauca. It is heartbreaking and I'm doing my best to stay balanced, active, and not overwhelmed. Pick a few issues and realize, because so many things are interconnected, that I am making a difference. I wrote to both my senators and to Obama about cutting the defense budget in half and having publically financed elections so that defense companies can't lobby for war. But you have taken many additional steps and have been living in Columbia for quite some time. I wanted to ask you what has motivated you (examining the deeper issues) to continue being so involved with this work. I lasted four months in Guatemala. I'm proud of that but yet I so admire people like you who can find ways to go further. What of your inner workings and feelings has allowed you to do this?

Again, it was absolutely wonderful, heartening and useful to see you today and witness the presentation. I have a lot of good memories about my time in Montana during Schweitzer 1st campaign, of working with you and the MT Human Rights Network and MLK project for students. Please don't hesitate to request lodging or meals when traveling through Portland in the future. The door is wide open.

Hi - I'm a journalist writing about Arauca and would be really interested in hearing more. My e-mail is hmance(a)gmail.com; I hope you have time to get in touch. Thanks, Henry