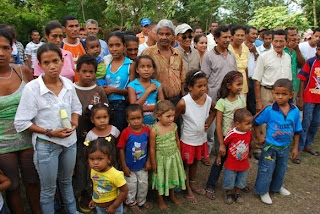 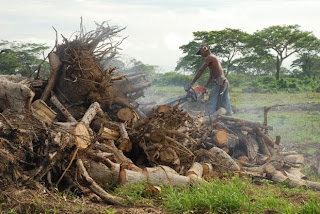 The Daabon company had 123 families (more than 500 people) evicted from the Las Pavas farm in the state of Bolivar on July 14. The company is cutting down trees and planting palm where the peasant farmers had been growing food for their families. I participated in a Christian Peacemaker Team delegation that visited the community from September 26 to 29 and witnessed the destruction caused by Daabon.

Daabon claims to be a socially and environmentally responsible leader in organic agriculture. The company sells The Body Shop ninety percent of the palm oil used in the production of their soaps. The Body Shop portrays itself as protecting the planet and defending human rights.

Leaders of the Las Pavas women’s association told us how they were evicted from their land. Approximately 200 children and 300 adults were at the Las Pavas farm on July 14. The police arrived around 8 A.M. They were accompanied by several armed men, dressed in civilian clothes and with cameras. The riot police arrived two hours later. The police encircled the farm and began closing in on the community members, with the riot police beating their clubs against their shields. They stopped just a few feet away from the people of Las Pavas.

Police overturned the community’s containers of drinking water and pots of cooked food. Various people told us that it appeared the police were trying to provoke a reaction that would then be filmed by the men with cameras. Around 4 P.M., the police threatened the community – if the people didn’t leave peacefully, they would be forcibly removed. In the face of that overwhelming force, the community decided to abandon their farm.

The people were not allowed to return to their fields and their 150 acres of food crops (squash, yuca, and corn) have been destroyed. Fourteen houses that were used to shelter farmers and their harvests were knocked down, carried away, and set on fire. Large trees have been chopped down, cut apart, and used to fill in wetlands.

The members of the Buenos Aires Peasant Association began working communally on the Las Pavas farm in 1997. The farm is located two miles from the community of Buenos Aires and had been abandoned by the previous owner, Emilio Escobar. Colombian law enables people to take possession and use abandoned land, and to then receive legal title to that land. The Colombian Institute for Rural Development (the government agency responsible for that process) visited Las Pavas in June 2006 and verified that the land had been occupied and farmed by the peasants.

After that visit, Escobar came to the farm with a group of armed men and threatened the peasants. A paramilitary group also went to the farm in late 2006 and issued a threat – if the people didn’t leave, their family members could be killed. The peasants abandoned the farm and two Daabon subsidiaries (C.I. Tequendama and Aportes San Isidro) signed a contract with Escobar a few months later. On January 15 of this year, the people returned to Las Pavas to begin planting their food crops. Daabon sought a court order to have them evicted and the police carried out that eviction on July 14.

Seventy percent of the arable land in El Penon county (where Las Pavas is located) is now planted in palm – primarily to produce fuel. The community asked us to film the destruction caused by the palm companies in the area. The companies have acquired large amounts of land and are draining the swamps and wetlands to plant palm.

We traveled along a raised roadway to a point where we could see a beautiful body of water on one side of the road – the Elubero swamp. Another body of water, the Escondida swamp, used to exist on the other side of the road. A channel had been dug from the swamp to the road, two large pipes placed under the roadway, and another channel dug from the road to the Solera river branch - draining the entire swamp. There are now rows of palm plants growing on that land.

The plantation on that side of the road represents the Colombian government’s vision for this region. There are already 190,000 acres of palm plantations in the Middle Magdalena river valley, and the government plans to have 1.7 million acres of palm here by 2018. The swamp and wetlands on the other side of the road represent the Buenos Aires Peasant Association’s vision for the region – preserving what remains of the natural environment and using agricultural land to produce food for the people.

P.S. Photos of some of the Las Pavas families and the destruction caused by Daabon:
Posted by Colombian Journey at 2:12 PM