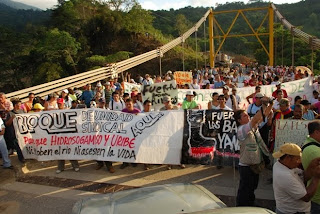 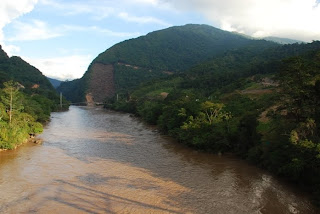 More than 500 people occupied the Sogamoso River bridge on October 12 (“Columbus Day”) to protest construction of a hydroelectric dam on the river. The action was part of a national mobilization called the Minga of Communal and Social Resistance. Minga is an indigenous term for collective action, and it is the indigenous movement that is leading the way in the struggle for social and environmental justice here in Colombia.

The Sogamoso River is beautiful as it flows through a narrow canyon near the bridge. Sadly, heavy machinery is now scraping away at the side of the mountain in preparation to build a 600 foot-high dam which will flood 17,000 acres of land.

The blockage of the river will destroy the livelihood of approximately 200 people that provide for their families by fishing in the area directly below the dam site. The Sogamoso feeds into a vast network of swamps and wetlands that will also be affected by the dam – impacting the lives of many more fishers and their families.

Nearly 20 buses brought people from the cities of Barrancabermeja and Bucaramanga to the Sogamoso River on October 12. The people divided into five groups with each group discussing one of the five main issues of the Minga. Each group built a cooking fire and began preparing a large cauldron of stew for lunch. Community was created as people joined together in cooking and conversation around the fires.

“Land and Territory” was one of the issues of the Minga. Strong opposition was expressed to the recent military accord signed by the Colombia government and the administration of Nobel Peace Prize recipient, Barack Obama. The accord enables the U.S. military to use seven bases in Colombia as part of the “war on drugs and terrorism.” The concern is that this will escalate the war in Colombia and that the bases could also be used to intervene in the neighboring countries of Venezuela and Ecuador.

“Economic System” was another of the issues of the Minga, and strong opposition was also expressed to the “free trade” agreement between the U.S. and Colombia that was negotiated by the Bush administration. The agreement would be particularly harmful to small farmers in Colombia who can’t compete with subsidized industrial agriculture from the U.S.

When Barack Obama was campaigning, he declared his opposition to the agreement due to the repression of union activists in Colombia and his stance generated a lot of press coverage here. However, in April he spoke about promoting Congressional approval of the agreement. Obama’s Commerce Secretary, Gary Locke, and Trade Representative, Ron Kirk, are both strong proponents of corporate free trade.

After lunch was shared alongside the Sogamoso River, the people then occupied the bridge to protest construction of the dam. The bridge lies along the Barrancabermeja-Bucaramanga highway and traffic was shut down for more than an hour.

Honorio Llorente, president of the Sogamoso Bridge community council, participated actively in the Minga. His opposition to the dam apparently angered some powerful forces in the region. Five days later, on October 17, Honorio was shot and killed.

Photos of the protest at the Sogamoso River bridge and the view of the river from the bridge:
Posted by Colombian Journey at 3:24 PM