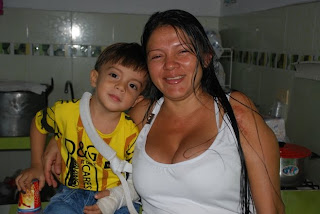 I recently returned to the state of Arauca for a visit and I received a wonderful gift of love, community and perseverance. I’ve been reflecting on that gift during this season of solstice, Chanukah and Christmas.

I was able to be with my godchild, Kuss Bryan, for the celebration of his fourth birthday in Fortul on December 1 (see attached photo). His mother, Alba, was severely wounded in her left shoulder during the bombing of Santo Domingo on December 13, 1998. The Colombian air force dropped two U.S.-manufactured cluster bombs on the community – killing 17 people and wounding 25. Employees of Airscan, a U.S. corporation providing security for Occidental Petroleum’s oilfield and pipeline in Arauca, provided the coordinates for the bombing. The survivors sued the Colombian government and the government was forced to pay reparations last year. Alba used the money she received to build a small house for herself and Kuss.

Alba’s father, Wilson Garcia, was the president of the Santo Domingo community council and he was killed by the guerrillas on March 24, 2006. Alba is six-months pregnant with her second child and is due to give birth in March. We talked about the new life that will be arriving in her home during the same month as the anniversary of her father’s death.

Father Luis invited me to lunch the day that I arrived in Arauquita. He’s very committed to the struggle for social justice and he has denounced the economic violence in Arauca – people living in poverty in a region rich with natural resources. “We’re here (on this earth) to love and be loved,” he said the last time that we shared lunch. At the end of evening mass he announced, “We’re glad to have with us again the human rights defender, Scott, who is now living in Barrancabermeja but has a special relation with our parish.”

I stayed with Maria Ruth and her six children while I was in Arauquita. Maria Ruth is a member of the Arauquita municipal council and has been threatened by both of the guerrilla groups that operate in Arauca. She’s told me, “You’re part of this family,” and they always manage to create space for me in their home.

That evening, I dined on a slice of fruit pizza prepared by Maria in her cart near the park. I’m a very loyal client whenever I’m in Arauquita. “We were just talking about you last night,” she said when I arrived and she gave me a hug.

In Saravena, I stayed with my friends Hugo and Rosa. Hugo is a surgeon at the public hospital and we share a love for classic rock music. He was listening to Jethro Tull when I first visited their home three years ago and he was pleasantly surprised that I recognized the band – the start of a wonderful friendship.

I became very sick while I was in their home with an intestinal infection that I apparently acquired during the last trip to the countryside here in the Middle Magdalena region. Hugo took me to the emergency room and I saw my friend Aide there. Her father, Alirio Martinez, was the president of the Arauca State Peasant Association. The army executed Alirio, along with two other community leaders, on August 5, 2004. Aide just completed seven years of medical school in Cuba and she is continuing her father’s legacy by serving the community as a doctor in the Saravena hospital.

The gift of love and community that I received from the people of Arauca fills me with joy and hope. Their strength and perseverance also inspires me to continue on this path of working together to create a better world.

Photo of Kuss and Alba:
Posted by Colombian Journey at 11:22 AM