Prayer as a call for justice 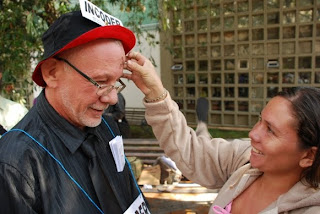 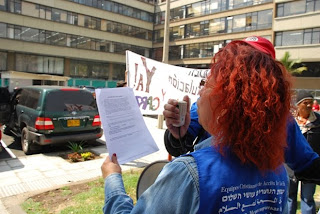 Christian Peacemaker Teams (CPT) organized a public action in Bogotá on Ash Wednesday (February 17) to call on the government to provide land titles to the communities of Las Pavas and Garzal. Fifty people gathered together in front of the Colombian Institute for Rural Development (INCODER) and used song, readings, theater, liturgy and prayer in a powerful and moving cry for justice.

The ash that we received on our foreheads was from trees that had been chopped down and burned by the Daabon company in the Las Pavas farm. Daabon had 123 families evicted from the farm in July 2009 and is destroying the cropland, wetlands and forest in order to create an oil palm plantation. That eviction could be reversed if INCODER finally provides the land title to the people of Las Pavas. The ash was placed on us by Mariela whose community of Garzal is also at risk of losing their land if they don’t receive titles from INCODER.

Alix, president of the Colombian Mennonite Church, faced INCODER as she read through the megaphone from Isaiah 58. God calls on her people in that passage “to loose the bonds of injustice, to undo the thongs of the yoke, to let the oppressed go free, and to break every yoke.”

Adriana and Gerardo shared the reading of the metaphor in 2 Samuel 12 in which a rich person kills the beloved animal of a poor person. Gerardo read the original verses while Adriana read verses that adapted the story to INCODER’s mistreatment of Las Pavas and Garzal.

Phil played guitar and led us in singing “No Basta Rezar” (It’s Not Enough to Pray). “No, no, it’s not enough to pray. A lot of things still need to be done in order to achieve peace.” He also wrote a song for the action called “Oiga!” (Listen up!) – “Listen up! We’re not going to accept this injustice. Listen up! We’re moving forward. We’ll always work for peace.”

Representatives of Las Pavas, Garzal and CPT then went to the entrance of INCODER and delivered a letter that began, “We’re writing to you on this day of Ash Wednesday; a day to reflect on our actions and attitudes, and to seek the path of repentance and forgiveness. We respectfully invite you to seek this path and to recognize that you have failed the communities of Las Pavas and Garzal. These communities have been waiting years to receive their titles.”

According to Colombian law, people can occupy vacant or abandoned land and then receive title to that land after they’ve been there for five years. Members of the Buenos Aires Small Farmers Association (ASOCAB) moved onto the abandoned Las Pavas farm in 1997. An INCODER commission visited the farm in 2006 and verified that the families met the requirements to receive the title. Emilio Escobar, the former owner, returned to Las Pavas later that year with a group of armed men. He threatened the families who then abandoned the farm. The Daabon company signed a purchase agreement with Escobar the following year. The 123 families of ASOCAB moved back to Las Pavas in January of last year and Daabon had them evicted in July.

The letter to INCODER ended, “In this season of Lent, INCODER has the possibility of giving new life to these communities by providing those titles.” Alix concluded her reading of Isaiah with these verses, “If you remove the yoke from among you, the pointing of the finger, the speaking of evil, if you offer your food to the hungry, and satisfy the needs of the afflicted, then your light shall rise in the darkness…you shall be like a watered garden, like a spring of water, whose waters never fail.”

Photos of Mariela placing ash on Stewart, a CPTer dressed as an INCODER representative; and Alix facing INCODER as she reads from Isaiah.
Posted by Colombian Journey at 10:29 AM