A friend becomes a killer 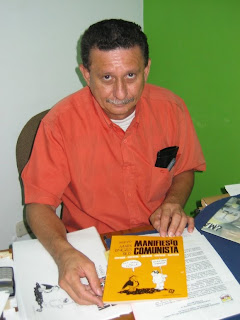 My friend Jaime Carrillo killed his spouse, Carmen Gutierrez, on February 26. Jaime had dedicated his life to defending human rights but he acted just as brutally as the paramilitary death squads that had threatened him. It appears that the calm and soft-spoken man I had known went into a frenzy of jealousy and rage.

Jaime was the human rights coordinator of the Arauca Teachers Union and president of the United Labor Federation in Arauca. I met him in June 2004 when he was living in the union office in Arauca City. The paramilitaries had threatened to kill him and it was too dangerous for him to stay in his home.

I visited Jaime again two years later. He gave me a list of 28 teachers that had been killed in Arauca and told me, “I knew most of those people.” The union office had an armored door, bulletproof windows, and video surveillance camera; and Jaime moved around Arauca City with two armed bodyguards. Jaime said, “I sense that I could be the victim of a bombing and I worry about my spouse.” Carmen had also been mentioned in the threats against him.

According to media reports, Jaime and Carmen separated a month ago. Carmen was a nurse at the Arauca City public hospital and Jaime was waiting for her after she finished her shift on February 26. He stabbed her ten times and then cut his own neck. He didn’t succeed in killing himself and is now in prison for murder. Carmen and Jaime had three children who are nine, seventeen and twenty years old.

I called Sonia (president of the Joel Sierra Human Rights Foundation) to talk with her about Carmen’s death. She told me that our friend Salinas said he was “very perplexed” and that describes how most of our friends feel.

I’m used to denouncing the actions of corporations, governments, and armies. Denouncing the murderous action of a friend is more difficult and confusing. In addition to the crucial question about the root causes of this violence against women, it also raises personal questions for me. What am I doing here and is there any value in this?

In response, I find myself reflecting on the ideal of being consistent in our words and actions. It seems easy to focus on the abuses committed by others while ignoring the abuses that we commit within our own organizations and relations. I’m also realizing my need to have a firm foundation from which to act. For me, that’s my sense of spirituality which is a bit shaky at the moment. Finally, I’m aware of the need to maintain balance in my life in order to avoid falling into burn-out – to be able to recognize and experience the love and beauty that continue to exist on this earth.

None of these reflections will change the agonizing death of Carmen or the suffering of her children. However, in the midst of this confusion and fatigue, hopefully they will enable me to continue forward doing what I can in our collective efforts to end all forms of violence.

Photo of Jaime in the union office in July 2006, showing some of the threats that he received (including a booklet about the alleged dangers of communism):
Posted by Colombian Journey at 9:55 AM