Marching for the lives of teachers 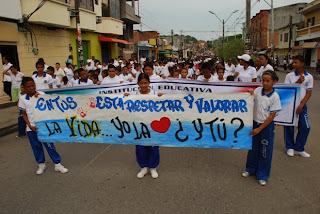 More than 2,000 students and teachers marched through the streets of Puerto Berrio on March 17 to protest the killing of a teacher and his wife. Duvian Rojo and Veronica Cadavid were killed by two gunmen in the center of town on the evening of March 13. Puerto Berrio is controlled by paramilitary death squads that have relations with the police and military, and the killing occurred just two blocks from the police station. Duvian and Veronica were the parents of twins that are less than a year old.

The paramilitaries have been extorting more than 20 teachers in the town – demanding that they pay protection money in order to avoid being killed. Duvian filed a complaint with the prosecutor’s office that led to the arrest of two men, although none of the paramilitary leaders were arrested. His colleagues believe that he was killed in retaliation for speaking out about the extortions.

I felt a lot of tension at the beginning of the march, more so than at any other activity I’ve accompanied here in Colombia. I asked the parish priest, who had invited us to the march, if I could take some photos. He responded that it would be better if I did not. One of my teammates, who had been married by the priest, talked to him later and he agreed to let me get some shots. I was introduced to a man who then walked with me to the front of the march. The march stretched out for several blocks and it was very inspiring to see so many students in the streets of Puerto Berrio.

We met with a group of teachers after the march in the church, Our Lady of Sorrows. One man was wearing a t-shirt with a photo of Duvian that read, “Friend Duvian, you will always be in our hearts.” The teachers were very concerned about their safety and asked us to not mention their names. “You wonder if you’ll be the next victim,” one of them told us.

They described the relationship of the paramilitaries with the police and military. “These groups are mixed together with the authorities.” They also talked about the location of the killing – two policemen are usually stationed there and it’s near the station. “They (the killers) exited to the left and the police came in from the right.”

Puerto Berrio is a town of 50,000 inhabitants, located two hours south of Barrancabermeja. Two paramilitary groups are fighting for control of the cocaine trade in the region, and one of those groups has apparently entered into an alliance with the National Army of Liberation (ELN) guerrillas. The priest told us that three to four people were killed each week in Puerto Berrio during February. In the midst of all this, the teachers are determined to continue forward and to denounce the abuses that occur in their town.

Sister Miriam accompanies workers in the palm oil plantations near Barrancabermeja. During the meeting with the teachers, she said “Peace can appear to be a distant dream. However, there are new sprouts and signs of hope. We’re weaving together networks of people.”

Photo of students with banner, “It’s in your hands to respect and value life. I love it, do you?”:
Posted by Colombian Journey at 9:59 AM