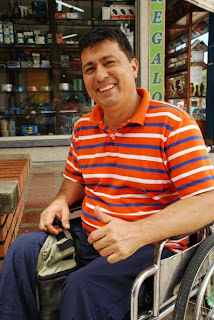 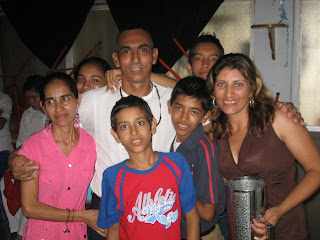 My friend Fernando was in a wheelchair in front of his office supplies store in Saravena on May 13. It was the first time I had seen him since he was shot in October 2008. I asked him how he was doing and he replied “blessed.”

He invited me to a cup of tea and began telling me about his experience. Two men had come into his home and shot him. One of the bullets struck the right side of his chest, passed near his lungs and heart, and exited the left side of his chest. The other bullet hit his spine.

A friend came to the house and took him to the hospital. “I was nearly dead when I arrived. My friend told me ‘Think about your children Fernando!’ and I clung to that. The surgeon opened me up here (pointing to his chest), massaged my heart, and I began the struggle to survive.” He was flown to Cucuta the next day, where he spent 27 days in intensive care and three more months in recovery.

Valentina (6 years old), Maria Fernandez (12) and Camilo (18) are his three children. The office supplies store is named Mafer, the nickname of his oldest daughter.

“What do you think, and feel, about the two guys that did this?” I asked him. “I already forgave them,” he replied. “I don’t have any anger, hostility or hatred.” He also said, “I talk with the pain. I say ‘we have to live together so don’t bother me so much,’ and I don’t take painkillers.”

Fernando is hopeful that he’ll be able to walk again someday. The bullet produced trauma, but didn’t sever, the spinal cord. He told me that “stem cell treatment for a non-severed spinal cord injury” is performed in Brazil and the U.S. and could restore his ability to walk. If you have any information or contacts that could help Fernando receive this treatment, please let me know!

I was visiting Saravena and Arauquita (in the state of Arauca) for a week of “rest” from the work here in Barrancabermeja. My friend Jose was standing in front of the Catholic church in Arauquita on May 10. The last time I had seen him was in the Arauca City prison in December 2008. We gave each other a big hug and then sat together for mass.

Jose was the president of the Arauquita chapter of the Arauca Small Farmers Association. The army detained Jose and 13 other people in Arauquita for the crime of “rebellion” on January 12, 2008. The municipal human rights official, Tatiana Blanco, went to the army base to inquire about the people who were being held there and she was also detained. Jose was finally declared innocent, and released from prison, on April 9 of this year.

Jose was a sanitation worker and the sole source of income for his spouse and their four children, who suffered a lot while he was in prison. He told me that he is trying to get his job back but the mayor’s office has been unwilling to reinstate him.

Marisol called out to me as I was walking by the Arauquita park on May 11. A guerrilla had killed Paola, her 13-year-old daughter, a month earlier. I asked Marisol how she was doing and she began to cry. “It’s hard to see the man (the killer) and not be able to say anything,” she told me. She would be risking her life if she spoke out. She said it’s very painful to lose a daughter, “but I have three other children” – and that keeps her going forward.

I talked later with the coordinator of the “Integral Well-being for Rural Girls” program being implemented in Arauquita by the Humanity in Force organization. The program includes psycho-social accompaniment, holistic medicine, legal assistance, education, communication and research. Marisol participated in a workshop organized by a psychologist and she’ll be receiving on-going support from the program.

The perseverance of Fernando, Jose and Marisol help put my minor frustrations into perspective and inspire me to continue our collective work of creating a more humane world.

Photos of Fernando in front of the Mafer office supplies store; and Jose, his spouse (left), children, and neighbor during a visit to the Arauca City prison:
Posted by Colombian Journey at 3:07 PM